SOLD OUT – Chợ Lớn Through the Ages with Tim Doling 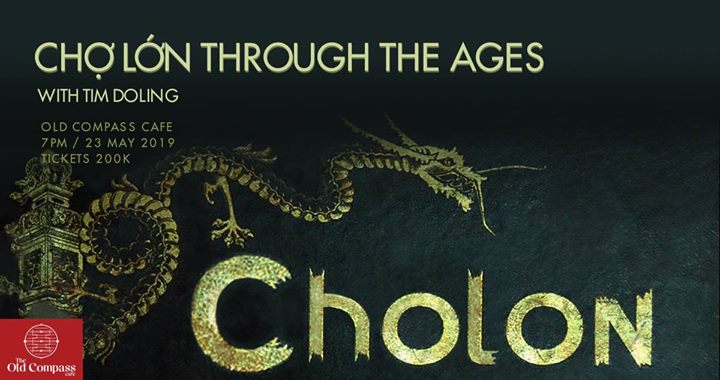 THIS EVENT IS NOW SOLD OUT, THANK YOU FOR YOUR INTEREST. FOR MORE GREAT EVENTS AT THE OLD COMPASS, LIKE OUR PAGE!

To coincide with the launch of his new 680 page guidebook “Exploring Saigon-Chợ Lớn – Vanishing Heritage of Hồ Chí Minh City” – a rewritten and much expanded version of the 2014 book
“Exploring Hồ Chí Minh City”
Tim Doling will deliver an illustrated talk entitled “Chợ Lớn Through the Ages” at The Old Compass Cafe on 23rd May 2019.

(TICKETS PURCHASED IN ADVANCE AT THE OLD COMPASS CAFE – SEE BELOW )

Tim will start by tracing the settlement of modern Chợ Lớn, first in the late 17th century by Ming refugee settlers, and then in the 18th and 19th century by waves of later Chinese settlers known as Qīngrén 清人, examining the important contribution both groups made to the economic growth of the South, and the physical evolution of the town, as defined by the creation and later filling of various inner-city waterways.

He will also show how, after the destruction of the Tây Sơn era, the earliest “xã Minh Hương” was reborn as Dī Àn 堤岸 – Tai Ngon in Cantonese dialect – and how after 1859 that 19th-century name, romanised as “Saigon” was “stolen” by the French to rename their colonial capital, formerly known as Bến Nghé.

The talk will examine how the Chinese were the administered by the Nguyễn dynasty, and later also by the French, being taxed heavily but ultimately kept on side by the award of special privileges denied to Việt people.

Particular attention will be given to the evolution of the earliest settlers into the mixed-race Minh Hương community, and to the way in which the Chinese in Chợ Lớn administered their own communities through the bāng 幫 system, building temple-offices known as huìguǎn 会馆 (assembly halls) and looking after the welfare of their citizens by offering them financial and legal assistance, maintaining the streets, and building schools and hospitals. The very special “executive” role of the communal temple known as the Thất Phủ Võ Đế Miếu (Qīfǔ Wǔdì Miào 七府武帝廟 or ‘Seven Districts Martial Lord Temple’) during the French colonial era will also be explained.

Tim will conclude by showing how, despite the emergence of an influential Vietnamese middle class from the 1920s onwards, and the demise of the bāng system under Ngô Đình Diệm’s RVN First Republic, powerful Chinese merchant families continued to exert a strong grip on the economy of Chợ Lớn until 1975.

Copies of Tim’s new guidebook “Exploring Saigon-Chợ Lớn – Vanishing Heritage of Hồ Chí Minh City” will be on sale at the event.

Join us for a special Saigon evening.

Entrance tickets purchased in advance directly from The Old Compass Cafe only:

TICKET AND DINNER
Vietnamese set dinner including a glass of red or white house wine – 450,000VND

Entrance tickets at the door (if available) 250,000VND. (Please note that this is an intimate venue and most talks sell out).

CHILDREN UNDER 12 YEARS OLD NOT PERMITTED. GROUP REQUESTS HANDLED BASED ON AVAILABILITY.