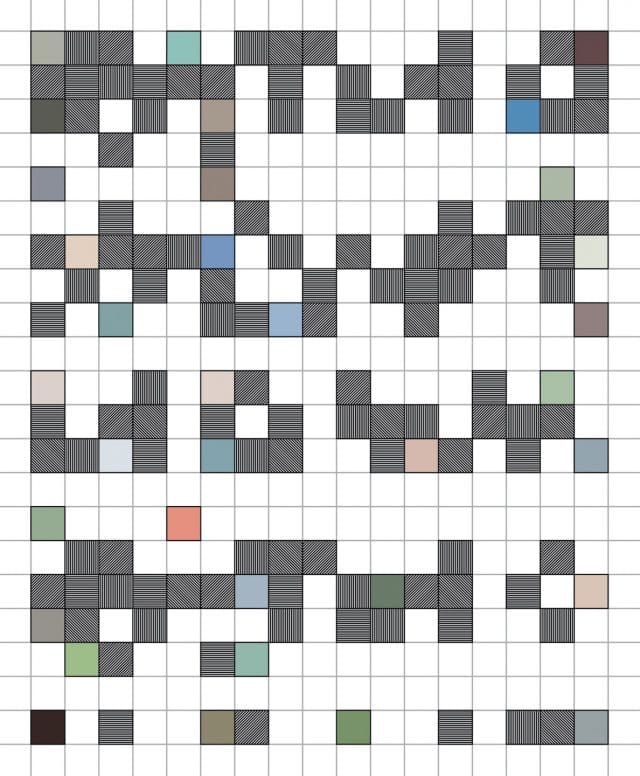 Photography to you means…
Another medium in which to explore and experiment.

When I frame the image…
I make the first in a countless series of decisions.

A camera is…
A tool for initiating, developing or documenting a piece of work.

This time I used my map and numbering system as a reference so I would be able to pinpoint the exact location of any source information gathered, in this case: colours.

Originally I was born and grew up in the UK but since May this year, I have been living in Ho Chi Minh City, arriving from Hong Kong where I had lived for many years. Coincidently I relocated to Vietnam exactly 25 after arriving in Hong Kong, 25 years to the day.

I studied at Leeds Arts University and Northumbria University in the UK and also with RMIT University whilst living in Hong Kong. At college, I concentrated mainly on the making of sculpture with an additional interest in printmaking because of a desire to introduce a more physical aspect to my drawings. Over the years though, constraints such as lack of storage space, the high cost of studio space etc. pushed me to gradually embrace exploration in other, more portable media.

To earn a living I worked as a professional modelmaker for around 15 years, the final 10 years of which was as a partner of a modelmaking company based in Hong Kong.

The skills and awareness of materials gained during this time have proved invaluable and have allowed me more freedom in the decisions I make when making work.

I have also taught art for around 15 years, including 13 years full-time teaching, 7 years in Higher Education. For 3 years I worked on the development of a BA (Hons) Fine Arts degree programme, acting as course leader for the initial cohort of students, seeing them all through to successful graduation.
For a time I pursued threads of investigation in drawing, printmaking and small sculpture but these projects remained quite separate in nature and it took a long time before they began to converge.

These days my work has revealed potential for multiple connections between different media, for example, a drawing may suggest further investigation in relief sculpture, or work towards a digital print may lead to performative walking and psychogeography. I tend to follow the work rather than attempt to push it where I would like it to go.

For the previous few months, I had been working on digital prints that involved the creation of layers within the print’s image with blocks floating on the uppermost layer. The configuration of these blocks was derived from a previous sculpture, made several years earlier, entitled ‘Excavation’. As I had been using cross-hatching to differentiate between the blocks within the image I felt that the print had taken on some of the imagery I had noticed within geologist’s maps, notably the way they employ a range of graphic patterns to denote the various geological materials present in the area covered by the map.

These digital prints were abstract in appearance and also abstract in the sense that they did not refer to actual locations. As I had recently moved to Vietnam, the thought came to me that I should create the next print based upon an actual location here in Saigon.

From a downloaded map of a certain area within District 7 of the city, I made a simplified version and numbered the road junctions. These intersections would be the focal points of the image in the print. The numbering of the junctions allowed me to keep a record of particular details collected. In total, there were thirty-four intersections within the area I studied.

I had walked around the area to gain an overview and a general feeling for the area but now was the time to revisit the location with a specific aim in mind. This time I used my map and numbering system as a reference so I would be able to pinpoint the exact location of any source information gathered, in this case: colours.

As I had already become familiar with an app for the mobile phone that allowed for the collection of ambient colours in a chosen location, I had confidence that it could contribute to my working method. Using this app I collected a colour sample for each of the thirty-four road intersections and used them as place-markers in my digital print. Of course, the app was only a data gathering tool, whereas I would retain the final say in how that data would be used.

Back in my studio, I isolated each of the collected colours and created a square-format swatch for each of them. This made it easier for me to review and drop them into place in my print.
Although systems-based strategies intrigue me, I always prefer to retain the final say based on considerations of the composition.

My work is often described as being conceptual in nature; nevertheless, I work with a mindset in which I grant the final say to the work itself, which is necessarily interpreted by me. I keep an eye out for unexpected serendipity, chance encounters or unpredictable outcomes if they appear to resolve the logic of the work. My working method could be described as systems-based but tempered with an editing process that is driven by an instinctive judgment developed through experience.

The final appearance of the digital print included overall grid lines to tie all the blocks together, but these are rendered in grey to push them back in space a little, contributing to the layering effect. The grid could provide a frame of reference without being too dominant in the hierarchy of elements.

As the placing of the colours within the print relates to the location where they were collected, the final configuration of the print could be read as constituting a map of the area studied.
Whether or not anyone would be able to use the print as a map when negotiating their way through the area remains debatable.

The user would need to be sensitive to the ambient colours, and the colours themselves may change over time. Some colours were collected from flowers and others from local advertising. Both of these elements could be subject to change, thereby removing points of reference. There is nothing to say that the print should or should not be regarded as a map, or whether it should function successfully as a map. The mere suggestion that the print could be regarded as a map could work as a trigger to initiate a line of thought for the audience. This line of thought is quite personal to each viewer, allowing each individual to create their own meaning for the work.

The work was printed out in an edition of 30 and with an overall paper size of A3. I envisioned the work as a personal psychogeographic exploration of the area. For this project, the aim was twofold: to become more familiar with the area and to take particular notice of the colours found at certain locations within that area.

© Copyright 2018 – 2022. All Rights Reserved.
This site uses cookies. By continuing to browse the site you are agreeing to our use of cookies.Ok