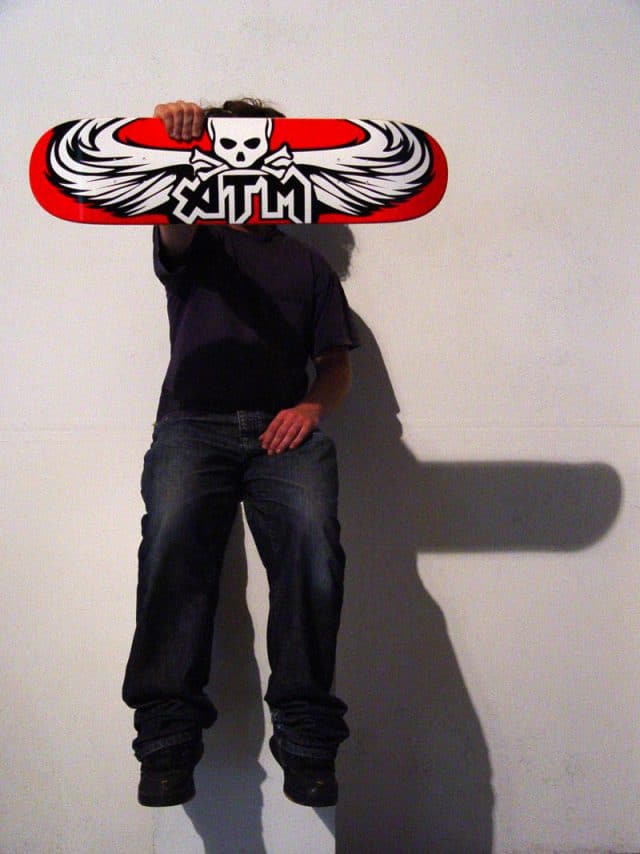 Installation art to you means The process of gathering mixed-media techniques in the production of an alien creature.

When I frame the image of an installation work I only limit the full experience of a three-dimensional work into a muted 2D space.

An installation work as a presence, as a ghost. This form of art only has a temporary life pre-defined through the exhibition duration and the same work reborn each time within different formal variation dealing with new architectural constraints but keeps is content, consistent. This is Re-Animator Time.

I’ve been working in a variety of media from traditional art mediums to new media technology under the label of installation art and sound/music performance since I entered the Fine Art School of Grenoble, France in 1997.

Being influenced by the context of our living experience and direct environment, my work is structured by the local and global phenomenon. By applying a poetic and often metaphorical language and violence, I try to create works in which the actual event still has to take place or just has ended: moments evocative of atmosphere and suspense that are not part of a narrative thread. The drama unfolds elsewhere while the build-up of tension is frozen to become the memory of an event that will never or that will take place.

Frozen moments, in-betweens, frames of discontinuity collide with the past and the present time while hinting at prospects of all tomorrows. These first reflective few lines displayed above, borrowed from my artist statement introduction could resonate with an experience that happened to me decades ago when I was a child, after having accidentally setting up in fire the wooden porch gathering all the garbage of the nearby commercial stores, delimiting the flower shop to the bakery. The following day after this incident happened, the baker dropped by my mom’s cafe to get a drink, located a few meters away from the incident. He starts to tell about the fire story and said: “ I was watching a TV series CSI-like and within a scene, there was a fire. I suddenly told myself, … ‘Wahoo! Great use of Technology these days; — we’ve got the image, the sound and now the smell”.

“ I was watching a TV series CSI-like and within a scene, there was a fire.  I suddenly told myself, … ‘Wahoo! Great use of Technology these days; — we’ve got the image, the sound and now the smell”.

I like the ambiguous aspect of understanding moments by producing events governed by specific physical atmospheres. This offers a singular experience by questioning the facts. The ‘switch’ or ‘twitch’ of ideas/objects/events, taking place in an unexpected space or at an unexpected moment of time.

After a presentation of my work at Ayala Museum in Makati, Manila, The Philippines in 2013 where I was talking about the Vietnamese Heavy Metal Underground Scene in comparison with the 90’s European Metal scene, someone told me while facing the museum’s buffet: “I am very surprised and I would have never thought that Heavy Metal would be entering an Art Museums”.

The works are characterized by the use of everyday objects in an atmosphere of middle class and popular culture in which recognition plays an important role. By contesting the division between the realm of memory and the realm of experience, I try to make work that generates diverse meanings. Associations and meanings collide. Space becomes time and language becomes image as well as the sound becomes visuals.

My work demonstrates how life extends beyond its own subjective limits and often tells a story about the effects of global cultural interaction. It challenges the binaries we continually reconstruct between Self and Other, between our own ‘cannibal’ and ‘civilized’ selves. Ruins and Waste of our current living societies and realities could be then re-injected in the art production by means of “Zombies & Re-Animators artefacts”.

By parodying and deconstructing mass media, culture, history and society, by exaggerating certain formal aspects inherent to our contemporary society, this often creates work using creative social tactics, but these are never permissive. By applying abstraction to a very figurative process of aligning references and influences altogether, I do create a work through intensive thinking processes that can be seen explicitly as a personal-universal-conceptual exorcism ritual.

My work focuses on the in/ability of communication, which is used to visualize reality, the attempt of dialogue, the dissonance between form and content and the dysfunctions of the poetic language. In short, the massive usage of references is the key element in the work. Because of the references overlapping references, a lack of clear recognition occurs, becoming a blurry understanding as a whole, providing new meanings and interpretations.

With a conceptual approach, I try to increase the dynamic between audience and author by objectifying emotions and investigating the duality that develops through different interpretations. My works are given improper functions: significations are inverted and form and content merge. Shapes are dissociated from their original meaning, by which the system in which they normally function is exposed. Initially unambiguous meanings are shattered and disseminate endlessly.

By studying sign processes, semiotics, signification and communication, I do touch various overlapping themes and strategies for the providence of meanings. Several recurring subject matter can be recognized, such as the relation with popular culture and media, working with repetition, provocation and the investigation of the process of interpretations within the scope of Art, Culture and History. The work questions the condition of the appearance of an image in the context of a contemporary visual culture in which images, representations and ideas normally function by placing the viewer on an unstable track. The work radiates a cold and latent violence by means of sound usage or visual constructions. Indeed, at times, disconcerting beauty emerges. The inherent visual seductiveness along with the conciseness of the exhibitions further complicates the reception of their manifold layers of meaning and their done/undone making process.

I currently work with RMIT University (School of Communication and Design) as a lecturer and live in Ho Chi Minh City, Viet Nam since 2006.