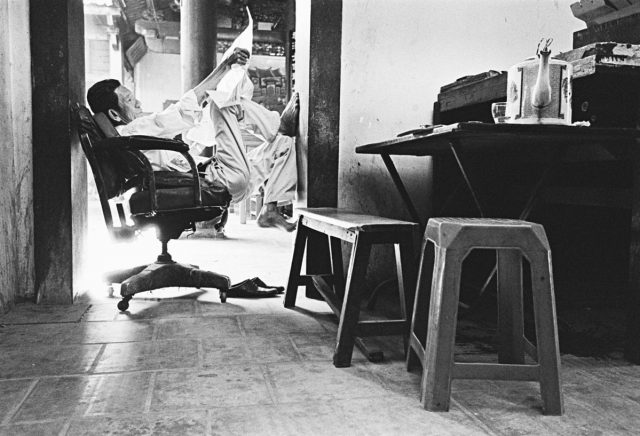 Photography to you means: A great deal. Sebastian Salgado explained it best: “Photography is my life. It’s my way of life, and my language.”

When I frame the image: I’m telling a story.

A camera is: A tool for stopping time and starting a dialogue.

Do personal work. Make art that is meaningful to you. Don’t compare yourself to others – no one can be you and express you better than you can.

Please tell us about yourself:
I was born and raised in Harare, Zimbabwe but I have been lucky enough to travel all over since I was very young. My father has travelled to almost every corner of the globe for most of his life, as a pilot, and growing up he inspired me to travel, to try new things and to leap. To risk failure in the pursuit of happiness. Vietnam is the sixth country I have called home, and I have lived in Saigon for seven years so far.

I’m a creative person at heart. My mother and grandmother were both talented artists. My mother is a skilled painter, and sketch artist and my grandmother was a skilled sculptor. As a child, I was always drawing, building, dismantling things to understand how they worked, painting, and writing short stories. I first picked up a camera at the age of 18 but at the time it was a tool to document family occasions and us kids were not encouraged to use Dad’s camera: it was almost always hidden away. Today I am a portrait photographer, a retoucher. and occasionally, an artist.

Your first camera?
I borrowed the family camera when I left home to study film production and media writing in Cape Town. It was a horrible plastic shit box that devoured 3-volt batteries but it was small and it was: there! A 35mm film camera, not of the charming, well-made mechanical variety but rather the loud, whining, plastic 80’s VCR variety.

It had a ridiculous 10 times zoom feature, and a phallic, plastic Darth Vader-esque member protruded awkwardly outward if you were foolish enough to zoom as this would invariably exhaust the battery. I occasionally used the camera to create storyboards for film courses that I majored in, but mostly I walked around the city capturing scenes that interested me. I was always short of money so the film was a real luxury and developing it was even more so. Later, I began to shoot positive film and slides because I didn’t have to pay to get them printed; I could just hold them up to the light. For my 21’st birthday I was given a Minolta SLR, which I never left home without. It became an extension of my personality.

What made you choose this medium?
I spent most of my childhood and teens in boarding schools, which taught me to be self-reliant but also kept me in school a lot
So, when I left for University, it was to a completely new and alien city. I knew no one there but it was going to be a huge adventure. So, I felt I had no choice, but to liberate the family camera.

Later that year I befriended an assistant working for a commercial photography studio. I recall visiting the studio, which had been set up in what was once a stone church. The greeting area for the studio had huge light panels installed on the walls.
The commercial work was carefully housed behind panes of glass. The images were all medium and large format slides, and monochrome positive slides, some 8 inches by 10 inches in size.

Back-lit by the panels the effect was mesmerizing. Similar to studying a stained-glass window up close. Each frame depicted an expertly composed scene with flawless lighting and the colour was like nothing I had ever seen. I was amazed to see in person what could be achieved with film. Especially since I was at that moment in possession of a film camera.

I was instantly hooked, I started using positive monochromatic film and slide film and I devoted much of the next 10 years of my life to creating moods and colours, attempting to create something close to what I had experienced that day. I found my way back to film fairly recently in Saigon.

Your project
The images here are a small selection from a project I began late last year. The project began as a personal challenge to shoot and develop one roll of black and white film every day for 2 weeks, giving me just over 500 frames. This was the plan anyway. I chose to use Kodak Tri-X 400, as it is generally readily available in HCMC if you know where to look, and it is a sharp, contrasty film with a pleasing grain. At least to me.

I quickly found, however, that despite my best efforts, I was wasting a lot of film rolls. I had chosen to capture candid street scenes, an area of photography that I am new to and one that demands a great deal in terms of skill, style, luck and persistence.

So, after developing, scanning and discussing my failures with friends, darkroom pro’s, and scan shop aficionados, I resolved to archive the first 10 rolls in a distant and obscure folder and to start afresh. I continued to shoot Tri-X 400 but I resolved to get closer to my subjects and to only press the shutter if I knew exactly what I wanted the image to say. Only if I knew the frame contained a story and had a purpose. The selection here is a small collection from rolls 11 to 25. Or 1-15 depending on how you look at things. The project is ongoing.

What made you choose this project?
It was difficult. It was different from the digital work and extensive retouching that I had done a lot of. It would challenge me and encourage me to explore the city. It would force me to learn how to develop, work within the limitations of the format. It would be a chance to create something more honest, since I have not altered the image in any way – not even contrast adjustments nor sharpening in Lightroom. But more than all of this the project would force me to create more collaboratively.

It is rare that a film photographer does everything alone unless s/he owns a darkroom. Thus, every frame is seen by at least, it’s creator, the darkroom owner (to ensure that the chemicals are fresh etc) other photographers using the darkroom, then the scanner(s) and finally back to the owner. A single process is often a communal effort, and this body of work improved when I sought feedback and applied what I had learned. In short, I started the project to learn a different approach to my craft and so far I have learned a great deal.

When and where did you capture these images?
These images were captured in Saigon. I explored several districts, but the ones included here are from District 4 and 5.

Who inspires you?
People. Faces, expressions, movements, gestures, and interactions, because the smallest look or gesture can tell a story and make or break an image. Also, good art and well-conceived, well-crafted work.

Where do you see yourself going within the next few years?
I would like to be creating more work, to have evolved and improved as a creative. I see myself continuing to work with like-minded creatives, photographers, artists, designers, models and stylists on projects that challenge and inspire me.

What is your advice to other artists?
Do personal work. Make art that is meaningful to you. Don’t compare yourself to others – no one can be you and express you better than you can. Set expectations and goals and push yourself. Work hard and strive to master your craft. Be kind. Be helpful. Smile.

Learn from mistakes and failures. Try not to take yourself or your work too seriously. Some may seem generic, but they have worked for me.

© Copyright 2018 – 2021. All Rights Reserved.
This site uses cookies. By continuing to browse the site you are agreeing to our use of cookies.Ok